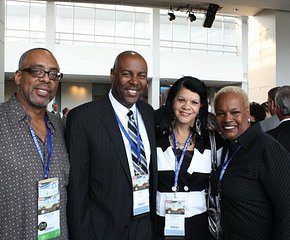 The Word of Faith ministry began in 1978 with Bishop Keith A. & Pastor Deborah L. Butler in Detroit, MI. They both were trained by Prophet Kenneth E. Hagin at Rhema Bible Training Center, Tulsa, OK. Following the leading of Holy Spirit they began ministry in Detroit, MI and today have impacted ministries established domestically and internationally throughout the world.

Bishop Keith & Pastor Deborah Butler are two of today's most powerful generals of God under the covering of Prophet Kenneth & Gloria Copeland.

While serving in Jackson, MS. at Word of Faith Christian Center the Lord spoke to Pastor Reginald W. Gibson on December 24, 1996  that He was sending he and his wife to Birmingham, AL. This came about after the Lord prompted him two prior months on a daily basis during intercessory prayer. God gave him the following Scriptures confirming his calling - I Timothy 4:11-16, Titus 1:5, Isaiah 55:4-5, and John 4:38. They immediately drove to Birmingham, AL to pray and obtain more instruction from God. Upon obtaining the timing and specific plan for the call upon their lives God also spoke to him about Phoenix, AZ. It wasn't until he returned to Southfield, MI. that his covenant father in the faith conveyed that God had instructed him to open a church in Phoenix, AZ and that he knew that he was to become one of his satellite pastors.

Both Pastor Gibson and his wife Co-Pastor Brandy were sent to Phoenix, AZ to lay the ground work in behalf of Bishop & Mrs. Butler for the new ministry ordained by God. The culmination of jackson, MS and laying goundwork for Arizona was great training ground. Later, Bishop Butler placed Pastor Gibson over the home based cell ministy. The growth was phenomenal with cell groups even in Toledo, OH, univerisities and a ministry on fire for God. The groups were inspired and engaged by the vision given Bishop Butler for cell ministry. Later, Bishop Butler has Pastor Gibson expanding cell training in Atlanta, GA, Phoenix AZ. and to interested Pastors upon request.

The call to Alabama was fulfilled on September 1, 1999 as they emabarked upon fulfilling the call. They opened the doors of Word of Faith Christian Center-Alabama  under their Founder, Bishop Butler on October 3, 1999. For one month they travelled to their sister church in Atlanta to be with their own company until their grand opening in Alabama with a start-up team of six.

Since the opening in Birmingham, Alabama the Gibsons were led to change the name of the ministry to its current Word of Faith Global Ministries, Inc. They have established international headquarters in Paris, France and the Pastoral oversight of Light For the Nations Church, Pastor Lucie Lupemba in Brussels, Belgium, a satellite church in Ivory Coast, Africa, Pastor Pastor Paul & Pauline Mahan, prayer ministry in Kinchasa, Democratic Republic of Congo, Minister Cadytema Dangbele (prayer center to open 2016-2017), 38 churches in Yelesharwen, India, a Healing School and a leper colony ministry handled by head minister Jacob Mary and Pastor Mari Mary. Ministry alliances are in Warri, Nigeria, Ejiro Udenwoke, and in Israel (Eden Organization), Shirley Katzir.

None of this could have manifested without Holy Spirit opening doors and sending the Gibsons a dynamic European & African Ministry team of Nicole Emany, Eric Punji Bemba, Mbemba Bemba and Kevin Bemba and major support with M/M Misha Emany and M/M Lorice Emany and dynamic translator Aniyshai Tshimanga.

VISION OF THE CHURCH